Barcoding as a tool to track emerging pests: the case of the sugarcane long-horned beetle

Identifying agricultural crop pests quickly and reliably is critical to track their spread and to apply suitable control measures where needed. However, the identification of insect pests is often hampered by the lack of taxonomic expertise, especially in complex and poorly known tropical groups. DNA barcoding is often used as a supporting tool to identify species in the context of invertebrate pest management but relies on comprehensive and well-curated molecular databases.

In a collaborative project, postdoctoral research fellow Dr. Marion Javal and C∙I∙B Core Team Member Prof. John Terblanche who are both based at Stellenbosch University, led a recent study along with entomologists from other institutions and industry partners to better manage an emerging sugarcane pest in South Africa.

The sugarcane long-horned beetle (Cacosceles newmannii) is native to Mozambique, eSwatini and South Africa. Larvae of this beetle were found in abundance in 2015 feeding on commercially grown sugarcane in KwaZulu-Natal, South Africa. This beetle digs galleries into the sugarcane stool and feeds inside the stalks causing significant crop damage, and thus impacting cane farm yields (See picture below). The reasons and the mechanisms underlying the rapid emergence of the beetle onto sugarcane from feeding on its indigenous host plants remain unclear, but it was clear to the team that the species has the potential to spread rapidly and cause considerable agricultural and economic losses. When tracking the potential spread of this pest, it was observed that many other related Prioninae (a subfamily of long-horned beetles) were trapped around the sugarcane fields, resulting in potential confusion for the pest scouting or monitoring teams who are keen to prevent further outbreaks. Furthermore, museum records cast little light on this group of beetles partly owing to taxonomic revision of the group and morphologically similar developing life-stages (e.g. larvae). 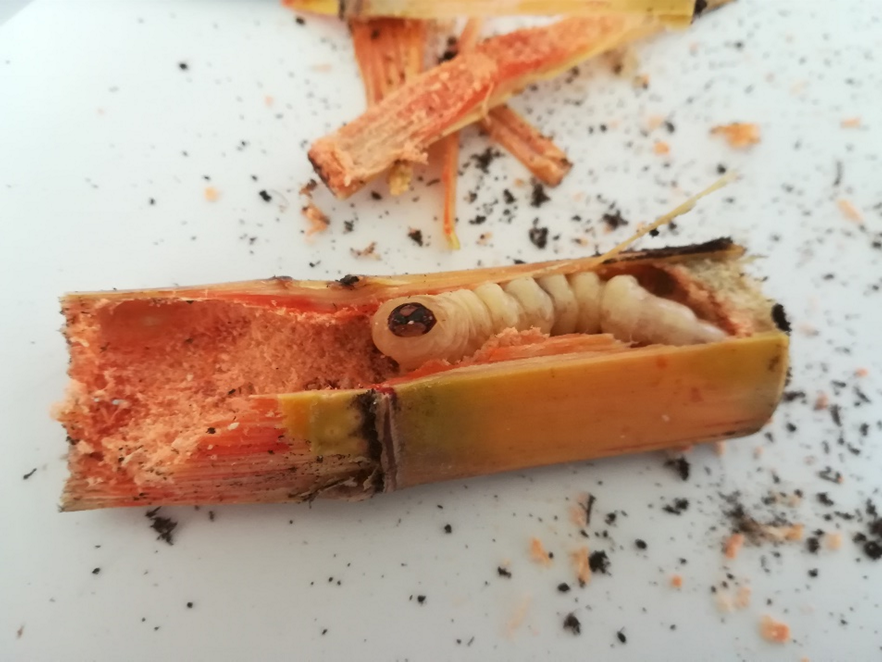 By assembling beetle samples from South Africa, Madagascar, Gabon and Democratic Republic of the Congo and obtaining DNA sequences from diverse and closely-related species, the team was able to compile a comprehensive barcoding database to address this pest problem in the region. This study therefore not only generated DNA barcodes of the emerging pest sugarcane long-horned beetle but also of other Afrotropical Prioninae to facilitate their rapid identification by plant protection officers. The team compiled a curated DNA barcoding reference library for 70 specimens of 20 named species of Afrotropical Prioninae with a focus on the genus Cacosceles. The barcode database will allow the molecular identification of the most common species of southern African Prioninae, and can be updated and expanded as additional barcoding data become available.

“This paper and the barcoding database we produced is a valuable tool for rapid and accurate species identification in the region for a poorly studied group of insects,” says Marion Javal. She adds, “It is extremely useful in the context of pest management but also is readily available in the public domain to be accessible to multiple stakeholders and facilitate advances in the pest management program.”

All data are available from BOLD at: dx.doi.org/10.5883/DSAFROPRIO