Can we predict the capacity for thermoregulatory behaviour to buffer climate warming impacts?

A large diversity of animals can use behavioural thermoregulation, which is the selection of microhabitats such as shade and sun patches or changes in activity patterns within days or between seasons, to maintain preferred body temperatures. While most people will readily associate these events to for example, a lizard basking in the sun, most animals use some degree of behavioural thermoregulation, in particular those that rely on the external environment to maintain optimal body temperatures (e.g. ectotherms such as insects, reptiles, and amphibians). However, the ability to regulate body temperature not only depends on the animal but also on the context or the habitat in which it resides.

In this study, Fey and colleagues, including Karla Alujević (C·I·B PhD student) and Susana Clusella-Trullas (C·I·B Core Team Member), used a framework that included the thermal performance of an individual and the spatial and temporal variability of microsite temperatures in the landscape to predict the behaviour of an African lizard. This model allowed us to test if relationships between habitat variables and costs of thermoregulation could be generalized, creating a model that can be used to predict thermal performance of ectotherms in nature and at large scales.

According to theory-based concepts of optimality, the leading strategy for a particular animal should depend on the costs and benefits of behavioural thermoregulation. The benefits are the maintenance of optimal performance while the costs are related to how much energy it will take to move between microsites or being exposed to predators or competitors. 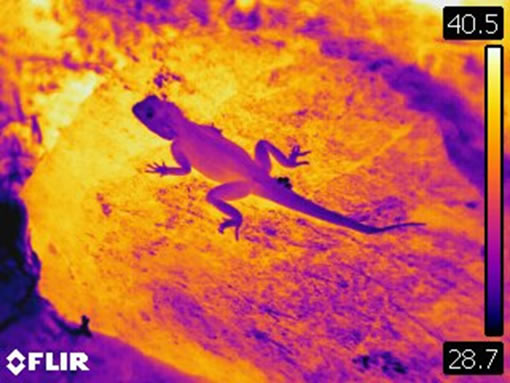 Given this theory, we can predict the potential for thermoregulation in particular environments that differ in overall average temperature but also in the distribution or configuration (shape/structure) of microsites. For example, we can simulate an individual moving in the landscape in order to maintain optimal temperatures and calculate the costs of thermoregulation as a proportion of the distance moved. We could also gather field data on activity patterns, body temperatures, energetic costs and landscape microsite configurations across landscapes. However, these approaches would be untenable if we had to apply them across many species and habitats in diverse regions.

This study showed that relationships in the environment (e.g. between average habitat temperature and the configuration of microsites) can vary consistently with the costs of thermoregulation for particular species and environments. For example, individuals living in habitats where the cost of thermoregulation increases with the mean temperature as thermal heterogeneity declines, will incur higher costs and be more vulnerable to the effects of warming.

These relationships can be used to improve models of species vulnerability by incorporating the capacity to mitigate climate warming via thermoregulation. As our landscapes change through habitat degradation, alien plant invasions and fragmentation, and as climate continues to change, our understanding of relationships between the thermal features of the habitat and the costs of thermoregulation are essential to make predictions of future population declines and extirpations.