The magnitude of biological invasions is increasing world-wide. Areas affected by alien plant invasions are continuously expanding and the extent and complexity of their impacts are increasing.

Because of limited funding for invasive species control managers are under huge pressure to use objective and defendable protocols for deciding which invasive species need priority treatment. All too often, impacts are assumed rather than proven or quantified, which means that valuable resources may be spent on invasive species that have little or no impact.

In a recent article published in the journal Diversity and Distributions, an international team of experts presented a novel approach of distinguishing species that have the potential for causing major impacts from those with limited impacts. The authors argue that species that have the potential to cause regime shifts (i.e. fundamentally restructure and transform ecosystems) should be considered the most high-impact species.

Dr Mirijam Gaertner, a restoration ecologist with the Centre for Invasion Biology (C·I·B) at Stellenbosch University and lead author, says their work represents an exciting and novel approach for flagging invasion events that cause impacts that everybody agrees deserve urgent management attention. “Regime shifts have been described for other situations, like the eutrophication of lakes or bush encroachment in savannas, but this is the first time that the concept has been applied as a way of identifying high-impact invasive species.”

Another co-author of the article and international expert on regime shifts, Dr Reinette Biggs from the Stockholm Resilience Centre, says these shifts are large, often abrupt changes in ecosystem structure and function: “Regime shifts are associated with the reorganisation of the internal feedback mechanisms that structure an ecosystem, such as plant-soil feedbacks. Once an ecosystem reaches a certain threshold, the regime shift can happen abruptly and unexpectedly and is often difficult or impossible to reverse.”

The research team identified five feedback mechanisms by which high-impact invasive plants typically enhance their own abundance and persistence. These feedback mechanisms include abundant seed banks (leading to a dominance of invader seedlings which eventually outcompete native species); changes in the frequency and intensity of fire (e.g. the features of some woody plants promote high-intensity fires in grasslands and shrublands); increased nitrogen levels (which promotes further proliferation of the invader and other weedy species); high litter volumes (inhibiting the growth of native species by outcompeting them for light and nutrients); and changes to the soil by altering the composition and function of the soil community (promoting the growth of the invader).

Using systems analysis and meta-analysis approaches to synthesize changes to ecosystems caused by 173 invasive plant species worldwide, the authors found that impacts on nutrient cycling in the soil have the highest likelihood of affecting reinforcing feedbacks which could eventually result in regime shifts. The culprits here are primarily shrub and tree invaders [such as Silver Wattle (Acacia dealbata) in Chile and Norway maple (Acer platanoides) in the USA] in forests, and herbaceous invaders (such as canary grass, Phalaris arundiancea) in wetlands.

Feedbacks resulting in regime shifts were found to be most related to processes associated with seed banks, fire and nutrient cycling.

Prof Dave Richardson, Director of the C·I·B, says the study has identified a useful method for prioritising invasive species for management action: “It provides a robust approach for flagging those events that occur due to the interaction between the invasive species and the ecosystems they invade, and allows managers to focus on those invasions that really matter.”

According to Prof Jane Molofsky, wetland ecologist from University of Vermont, “specifically targeting newly created feedback relationships can provide managers with a cost-effective action plan, which allows them to target newly identified positive feedback relationships and work to reverse them, for example by developing strategies to reduce nitrogen input into wetlands.”

Future research should focus on identifying the ecological thresholds at which dominant feedbacks switch in relation to levels of invasion. More work is needed to quantify both the impacts on native ecosystems and any changes in the feedback processes that drive or reinforce invasions.

The article, ‘Invasive plants as drivers of regime shifts: identifying high-priority invaders that alter feedback relationships’, was published in the journal Diversity and Distributions and included authors from the Centre for Invasion Biology (C·I·B) and the Centre for Studies in Complexity at Stellenbosch University (South Africa), the Stockholm Resilience Centre (Sweden), Umea University (Sweden) and the University of Vermont (USA). 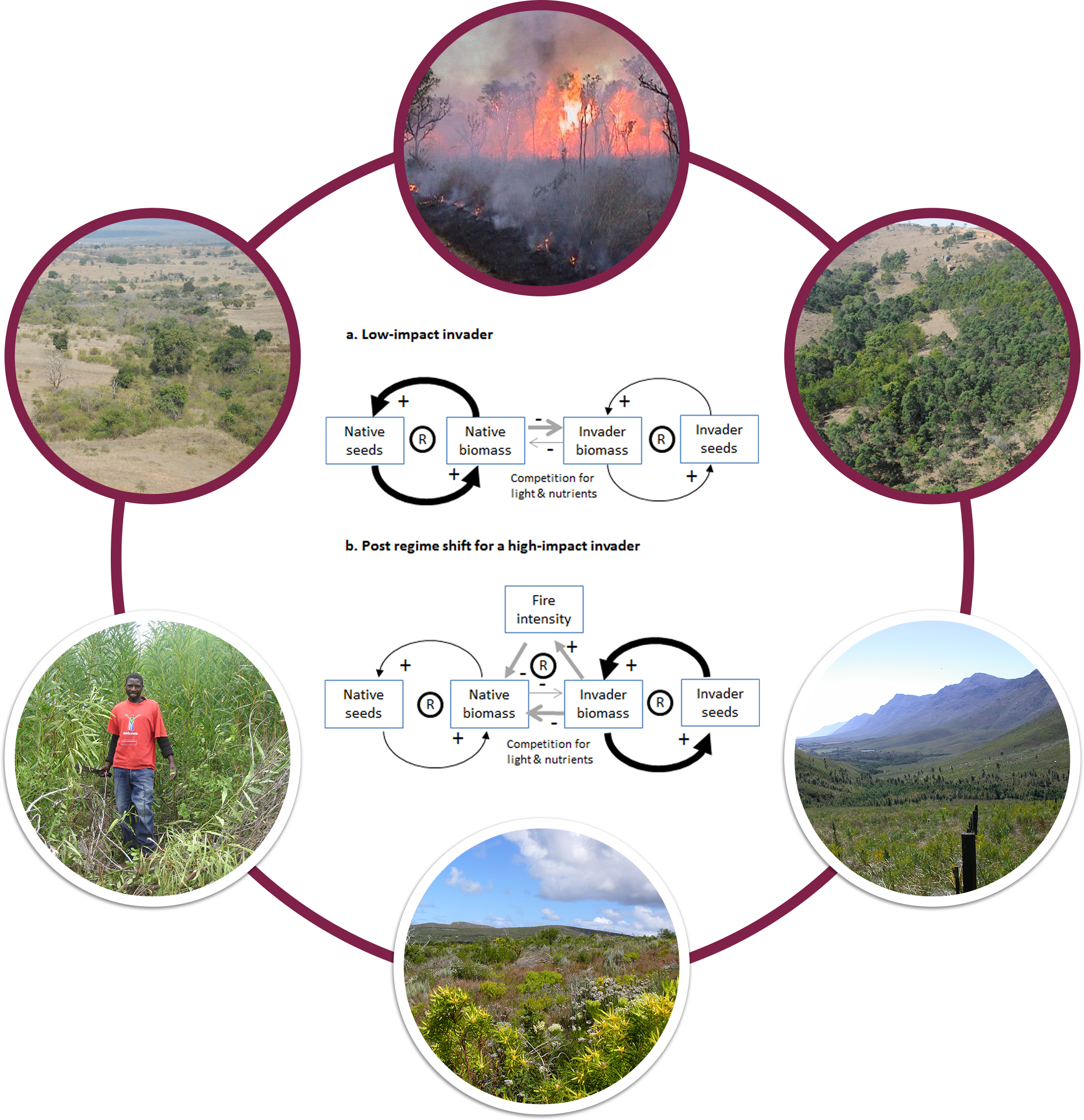 Wrapping yachts — the answer to dealing to heavily fouled vessels that have foreign species on them?