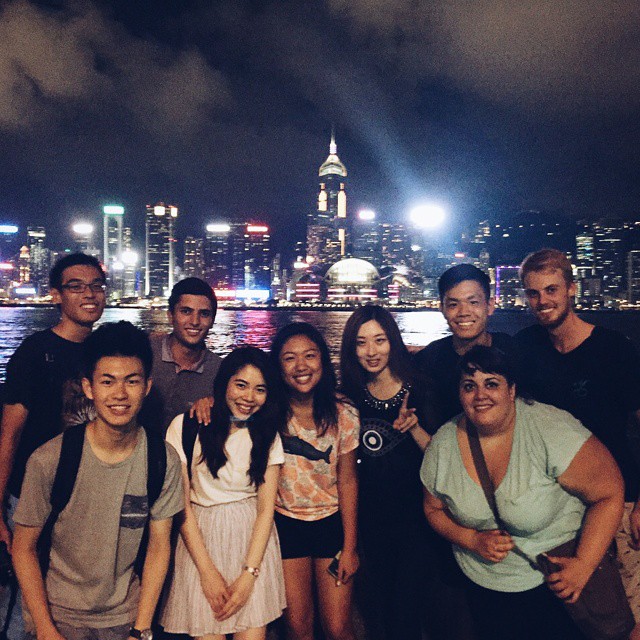 The lead up to the trip was exciting, yet nerve wracking. I was looking forward to the trip, however the date that the course was scheduled to start happened to fall on the last day of my first opportunity exams. There was a fair amount of admin to complete regarding the trip; visa applications to process, information required by the university in Hong Kong, plane tickets to be booked- as well as exams to study for! I had decided to make use of the opportunity of travelling to the East and tour Vietnam after the course, so there were arrangements that needed to be made for this too.

The Chinese University of Hong Kong (CUHK) was my destination. Despite their willingness to provide international students with any information we may have required, I went in feeling that I knew next to nothing about what was awaiting me – but perhaps this is a feeling that is normal to exchange programmes. CUHK offered a range of courses for internationals, ranging from courses in Chinese culture, religion and history courses, to principles of management. I opted for the principles of management course, as it is something that interests me and will prove to be useful for me after my degree (chemical engineering) within a professional capacity.

I did fairly little research on Hong Kong itself before I left for my trip. In retrospect, in may have been wise to do a bit more research beforehand. It wasn’t necessary and I enjoyed the freedom of starting an adventure into the unknown when that plane touched down in Hong Kong; however I am still left with a bucket list of things that I would love to do in the city.

I departed on a very uncertain note. I had had a terrible set up exams and left with the knowledge that I would probably have to do some rewrites. This was unfortunate, as my international programme fell within the entire rewrite period. I had to trust God that all would be fine academically, as I still felt that the international course was something that I was supposed to do.

The plane ride was filled with anticipation and as we flew over Hong Kong we emerged through a cloud bank to a sight that seemed other worldly. You can dream and envision a place as much as you like, and whilst Google images may help, there is nothing that prepares you for the reality of touching down in a foreign land.

The first sight of Hong Kong is magnificent. I had imagined a vast, sprawling city. I was greeted by the sight of a vast, sprawling city surrounded by beautiful pristine tropical jungle on rolling hills that SANK into bays of blue water, and islands that extended to the horizon. The airport is situated at water level, the runway on the edge of the land. The plane glided meters above the sea before reaching the runway and touching down – the most spectacular entrance to a country imaginable. I caught a bus to the university, which was situated on the mainland of Hong Kong in the New Territories. The first impression of Hong Kong was while travelling to the university sitting in the top of a double decker bus. The city seemed vast and magnificent, with 50-100 story skyscrapers packed together and buzzing highways full of busy people. What surprised me however was the greenery; lush tropical forests grew on the mountainous surrounds of the city, extending towards the bays of the South China Sea.

The university campus itself was spectacular. Keeping with the character of Hong Kong, it consisted of a conglomeration of skyscrapers, all dispersed over a hill on which the faculty building and dormitories stood. The university has experienced a lot of growth, and the dormitory in which I stayed was only a few years old. On the whole, the campus was modern and gave a great impression. My dormitory was called Woo Lee Sun and I stayed on the seventh floor, with a roommate from Canada. It was a mixed dormitory and I stayed with all the international guys in that corridor, whilst the girls doing the international course were based on the fifth floor.

The internationals were an awesome group for me; mostly from other Asian countries, such as Singapore and Indonesia, we formed a great bond over the length of the course. They were especially useful when travelling around the city and exploring! Although Hong Kong used to be an English colony and most people have an understanding of English, the fact that some of them could speak Cantonese was very handy. They also were much more clued up about what to do in Hong Kong and I enjoyed many experiences after class where they would initiate some adventure into the city or surrounds and I would just join on, ready to be awed. CUHK’s International office was also amazing in the way that they accommodated international students; as they had arranged for a number of short expeditions into the city, designed to give us an overview. The university outings consisted of: 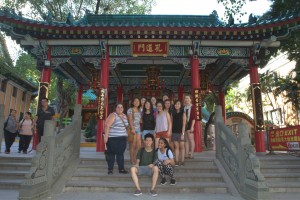 Besides for the formal tours, I saw some amazing sights. I went to a bar on the 116th floor of the Ritz Carlton that overlooked the city, dwarfing the surrounding skyscrapers. I took a bus to see the Big Buddha on Lantau Island and ended up spending a night on top of Lantau peak overlooking the South China Sea. I took a ferry to an island in the bay and kayaked round it, enjoying the still calm water as opposed to the Cape waters and waves I’m used to. I experienced the annual Dragon Boat festival which the whole island celebrates; beating drums, brightly coloured boats and streamers; saw Chinese White dolphins in the bay. I travelled to China- for the afternoon. I tried snake soup. And dog. And liked them both. I made great friends; originating from everywhere from Japan to Bulgaria to Senegal. I learnt so much; from experiencing the city and from the course itself. I discovered and reined a passion for the academic course that I completed over there.

I have left writing about the academic programme for last, as it is the experience I wish to emphasise. My chosen course was Principles of Management. I have an interest in leadership and a dream of running my own business someday and so I figured it was a good way to start. The lecturer was Robert Linden, from the University of Illinois in Chicago. He is a leading researcher in the field of management and organizational psychology and had established the doctoral programme for his university, but loves to teach and inspire undergraduates. What was awesome is that most of the research and findings that he exposed us to were his own, as well as significant. We covered a broad range of topics surrounding the field, following the traditional management format of P-O-L-C (Planning, Leading, Organizing and Controlling). What I absolutely loved was his emphasis on servant leadership and the values that it tries to convey from an ethos into a business practice. Servant leadership desires leaders to serve, guide and grow subordinates and isn’t limited to the organization but carries through all realms of their lives. It sets an example by working hard, emphasises emotional intelligence and tries to empower followers to reach their full potential. What was encouraging to see was how effective and successful businesses that adopted this ethos were, as we were shown through a range of findings.

Classes were from 9-12 each day and the course required about 2-3 hours of work a day if you wanted fully utilize the opportunity. There were two exams, one after a week and one at the end of the course, as well as a group project. The course itself was very easy to pass, in comparison to third year engineering, however the exposure was so valuable and I would love to apply the principles taught in the course in spheres of my work and life. The group project was also a very enlightening exercise, as it showed me many differences between the way we are taught in South Africa and how students in China and Hong Kong have been taught. What was interesting to note, and encouraging to our education system, is I found we have a far better developed set of communication and teamwork skills. Students in China are taught to work incredibly hard (even the local Hong Kong students stereotyped this!) , however their mode of learning is purely by memorization, and so our critical thinking is far better developed, at least at a university level.

After I had completed the course, I had an extra 10 days before I needed to be back in Stellenbosch, and so I decided to make use of the opportunity of being in Asia and went on an organized tour through Vietnam. We started in the north in Hanoi and travelled by train and plane all the way to Ho Chi Minh city in the south. My highlight was going on a boat cruise through Halong Bay- it was fulfilling a life dream. I felt God had called me to see that bay and it felt fantastic to see a dream become a reality. Halong bay is a natural wonder of the world and consists of large limestone monoliths; high-cliffed islets in the Emerald Sea. Dawn on the boat was breathtaking. I loved seeing the juxtaposition of Vietnam versus Hong Kong; Vietnam is very Third-World and more relaxed, although under communist rule. Hong Kong is a bustling metropolis flled with businessmen working 14-16 hour days. I am grateful for having seen the contrast.

Returning to Stellenbosch was quite a shock to the system. Vietnam had been 40 degrees Celsius at times, and between the weather and the time difference, it took me a few days to adjust to being home. I had returned directly to Stellenbosch for Metanoia’s Alumni reunion weekend which I had been involved in organizing. It felt strange to be back home and yet feel as if things were unfamiliar. Since classes have started, I have since normalized and returned my focus to my course. However I am doing so with new insight, better perspective and a bigger dream and clearer purpose. I want to thank Stellenbosch’s Post Graduate and International Office for the amazing opportunity that they allowed me, as well as for the special effort they went through in order to arrange that I could write Stellenbosch University exams whilst on my exchange. I would love to share more about my experiences in Hong Kong and am more than happy to if anyone wishes to contact me