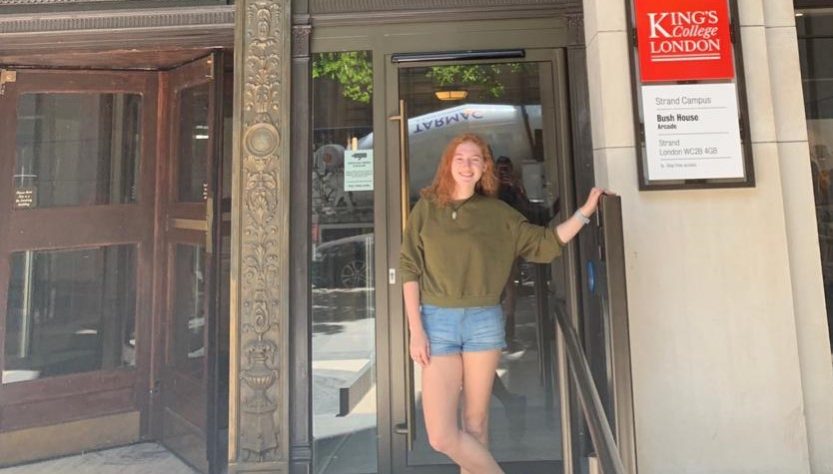 At Stellenbosch, I currently am doing my Honours in International Studies, and am focusing my thesis more specifically on a topic that falls within global health. As we have not covered this in class, it has been a bit of a DIY and teach-myself project, and I was eager to find a summer school that could supplement my studies with something related to health. I was thrilled to find the perfect course at the prestigious Kings College London called “Global Health and Social Justice”, which combines health and social sciences approaches in global health and social medicine.

I was elated to have been accepted for this course and knew that it was a once in a lifetime opportunity. Kings College presents an online Webinar a few weeks before you leave, and I’d definitely recommend “attending” that as it answers many questions and gives an idea of what to expect, as well as gives all the details about what you need to bring in terms of documents and passports. I’m lucky enough to have an Irish passport to match my red hair, so I could escape the chagrin of applying for a visa, so I have no tips to give there. Unfortunately there were not many direct cheap flights available, and I had to book a long flight that laid-over in Dubai before arriving in Gatwick. From there I booked the cheaper (but slower) option of transport – the Thameslink – into the centre of town. Definitely bring a suitcase with good wheels – there is a low of haling bags around! I had decided to book a few days extra before my trip to have time to explore London, so I stayed at a youth hostel called Astor Museum, right next to the British Museum. I met some amazing people there, and it gave me a chance to find my feet in London before the academics kicked in.

As for the summer school, I decided to book university accommodation rather than private accommodation, even though it was very expensive, based off the main premise that it would be the best way to make friends that I would be studying with. I would highly recommend this to anyone doing a summer school, as my residence friends quickly became my closest friends and most frequent adventure buddies. While the accommodation did leave a bit to be desired, such as the lack of cooking facilities (I lived on cereal) and a shower than poured onto the toilet, having a secure room to myself with WiFi and a desk for my studies was definitely worth it. There is even access to a gym! What I later found out was that my accommodation, Great Dover, was actually quite far away from the campus where I studied, so this brought in some unforeseen transport costs.

Kings College was responsive to emails and provided sufficient pre-departure information, even though sometimes a bit later than promised. They set you up with an email account and academic system almost identical to SunLearn and SU webmail, making it an easy transition.

Bring something to eat out of – plastic bowl, knife and fork as this is not provided. Bring a travel adaptor and as much food as possible if you have space – London is expensive!

Time at host university (and LONDON):

13 529.7km from Cape Town and 19 hours of transit later, I found myself stepping off an overcrowded Tube carriage, listening to an aptly named Lily Allen song called “LDN”, into the bustling whirlwind of central London. I bought an Oyster card for 5 pounds at the station, and topped it up with 35 pounds, but probably added another 60-70 pounds over the duration of my trip (the public transport system is amazing – SA take notes!). I decided to see how long I could survive off leaching Wifi from restaurants and public areas to save money, and this worked well enough, especially as the university and accommodation have free Wifi. As my hostel only allowed check-in at 2pm, I spent the day wandering the British Museum, winding streets of shops and lying down for a jet-lagged (a 1 hour time difference counts!) nap in a beautiful grassy park.

Pro: So many people in London read! On the Tube, in the parks, behind their shop stalls – the literary culture amongst all ages is truly admirable. We need this back in SA.

On our first day, we had a mini-orientation and an introductory class, and I’d also advise attending the welcome party in the evening to meet many new friends, even if you are stifling yawns from first-day exhaustion. Our class schedule was relatively relaxed, as we only had a few hours of class per day, allowing time to fit in coursework and readings as well as exploring and sightseeing. We had a different lecturer from different countries for almost every session, which made the sessions constantly stimulating and diverse in style and content. One of the lecturers even hailed from our very own Cape Town, proving that Kings truly is an international university. The class was the same size as I have at Stellenbosch, which allowed ample engagement from the class. We were assessed through two essays and a group presentation, all of which were similar in style and level to undergraduate Stellenbosch courses.

My course content was incredibly interesting, and while challenging my brain that hasn’t touched biology since high school, was exactly the right taste of global health that I needed to secure my interest in it for further studies (Masters at Kings, hello!). The course covered topics such as the role of partnerships in global health, the implications of an ageing population, social and health policies, medical pluralism, planetary health and global mental health. Lectures on the dangerous impact of climate change on global health systems went above and beyond the classroom, as the London streets were filled with climate change protests while I was there. We also went on a very interesting outing to a medical museum – the Wellcome Trust.

I naturally also tried to explore as much as possible. From the more cliché tourist attractions of Buckingham and Kensington Palaces, the Tower of London and walking the Thames, to strolling through endless markets, celebrating Pride, theatre shows, museums, bookstores and some social activities organised by Kings – to Greenwich village and to significant landmarks of Harry Potter!

Like my mother, I am one of those people who is perpetually striking up conversation with anyone I see, and alongside the amazing friends I made, I believe this is where a huge amount of my learning experience actually derived from. A two-hour conversation with a man in a hat stall in Portobello Road (who turned out to be a London professor) gave me the ins and out of postgraduate studies in the UK, personal advice for my career trajectory and comical insight on my observations of the typical Londoner. The forty-five minute walk to class every morning with newly-made but instantly close friends prompted daily culture conversations, exploring issues such as the differing impacts of social media on youth dating lives, the hot off the press British Prime Minister, pros and cons of state welfare, how our different countries address climate change, and even why the beloved red squirrel is dying out in the UK. There are few opportunities in which I have been able to meet so many foreign nationalities and engage so deeply with them, and we all had our minds sharply opened to how different our countries’ problems, lifestyles and solutions are.

Embarrassingly, I have been told that I have returned to South Africa with a British accent. However, besides this, I have also returned with new inspiration in terms of writing my thesis, pursuing a Masters in Global Health, new career ideas, reinvigorated aspirations to learn more languages and a rebirthed travel bug that yearns to go back overseas.

Tall stretching skyscrapers made me miss the space and mountains back home, widespread homelessness I saw made me realise the far-reaching, if differing in context, implications of modern-day inequality. I missed how friendly South Africans are, it’s something I never really understood until I went overseas. London was also incredibly expensive, I often struggled to afford food and the very overpriced attractions, so returning to a relatively affordable currency is appreciated! I made absolutely incredible friends from all over the world and will be making an effort to keep in contact with them, as well as hopefully having some new beds to crash on when I next go travelling!

London was magical, vibrant, endlessly enriching city and an unforgettable experience. Summer school gave me countless gifts, but one was extra special – an irrevocable appreciation for my home, South Africa.