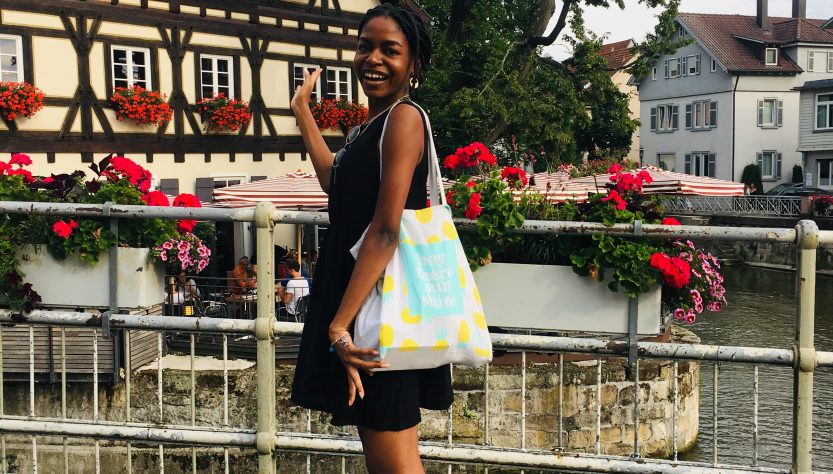 Shortly after my application, I received the news that I had been nominated to the University of Hohenheim after which I had to apply directly to the school. The direct application to the University was very fast.  In three hours after submission of the application, I received the acceptance letter from the University.  I was so excited about the news of spending a summer semester abroad and traveling to Germany for the first time! In my getting ready for the program, I took part in the Exchange Pre-Departure sessions as organized by the International office. I started to plan, make research about Germany as a country, their culture, language, weather as well as a list of places to visit during my semester exchange.

I started my visa application process a month before my scheduled departure. The visa was processed at the German Consulate office in Cape Town, South Africa. The application process was so easy and fast and in four days my visa was ready and I was set to begin my Germany adventures! My excitement and anticipation levels were getting higher and higher, I was looking forward to travel. Before long, my day of departure had come. I was ready to go!

I was thrilled when I arrived in Stuttgart because of its beauty, and its amazing infrastructure. It was beyond anything I had imagined or thought of! I was so impressed by the beauty of the University campus and its magnificent infrastructures. One of the infrastructures that caught my attention was the famous Hohenheim Palace commonly known as ‘Schloss Hohenheim’.

The first week of my arrival was the busiest. My classes started immediately and they run simultaneously with the orientation activities. I also had to go around and get myself registered as a resident in Germany. This meant juggling orientation activities, matriculation as well as classes all at the same time!  However, I made a few friends in that week that helped me settle and made this process less overwhelming for me. I would advise going a few days earlier than the day the semester begins to do away with most of the admin work. That also includes being mindful of this even before submitting the dormitory contract dates.

Orientation was wrapped up with an international student’s dinner where we were officially welcomed by the top university officials. Dinner was served over some wine and German pies. I met amazing friends from the orientation dinner and we visited most parts of the city together.

I enjoyed the academic experience in Hohenheim. I had the privilege of meeting and interacting with experts in my research field. I took three courses that are not offered at Stellenbosch to enhance my research skills. To further broaden my knowledge, I also took econometrics courses at the economics department. I gained a different perspective about research through participation in debates on different agricultural development topics. I also joined and participated in the innovation in agriculture and rural development seminars.

I had a chance to learn from people from different countries about discourses in agriculture, development and food technology. I particularly enjoyed being with classmates from different countries such as Nepal, Germany, Japan, Nigeria, France, Kenya, Mongolia, Uganda and India. Classes were always exciting especially the aspect where we had group discussions and shared different ideas about agricultural research with application from scenarios from our countries of origin. The education system in Stellenbosch and Hohenheim are quiet similar in terms of the methods of assessment such as seminar paper writing and presentations. On the other hand, they have different grading systems. Germany uses a GPA range of 1-5 while Stellenbosch uses letters A-F for grading.

My story would be incomplete if I do not talk about the beautiful historic castles in Germany! Germany has a rich and complex history, an invigorating culture and fun-loving people, this is something every student looks forward to. My favourite time of the week was when I got to visit some of the beautiful towns in Stuttgart. I tried German’s foods from the Hohenheim cafeteria which is called ‘Mensa’ meaning a dining hall in German. I liked the art, and I attended popular summer festivals such as ‘Sommerfestival der kulturen’, and music festivals. I also visited places outside Stuttgart such as Karlsruhe which is a town that is near the French-German border.

You cannot visit Stuttgart without going to the Porsche and Mercedes Museum. I like cars so much that I had to visit the Museum twice! I got to learn about the history of German cars.  The museum also offers you a great gaming session where you get to drive a Porsche!

Living in Germany helped me appreciate and learn a few things about their culture. One thing that rubbed off on me is the love of sparkling water because in Germany, water has to explode! I was also impressed by their recycling rules; you get a few bucks for returning empty bottles at the store for recycling. That’s pretty cool! Another thing that I observed is that after a lecture or a seminar, Germans knock on their tables instead of clapping. Knocking on tables after a presentation is form of saying goodbye or thank you. I didn’t realise this had rubbed off on me until I caught myself knocking on tables in Stellenbosch.

Besides the culture and educational experience, I also liked German’s transport system, it was fast, efficient and effective. I enjoyed the fact that students enjoy free transportation within the city on the trains and buses during the weekends and every day from 6am to 6pm.

It’s amazing how time flies when you are enjoying yourself. I felt like the four months had gone by so quickly. I grew to love the city, and made wonderful friends but it was now time to leave and return to Stellenbosch. Even though Stellenbosch is my home University I am also an international student there from Malawi. This study abroad experience helped me to appreciate the differences in culture in different countries. More importantly, I got to appreciate that there are different things that make countries great, because there is beauty in being different and unique.

Going on exchange has been one of the best moments of my life. I learnt a lot about people and also about myself. I have become more confident; I have learnt so much by observation; and I made friends that will last a life time. After this experience, I feel like I can do anything and I can go anywhere in the world and be really great. I want to travel more and explore more cultures and the diversity that exists in the world. I have found what I love through this opportunity and I will go for it! This opportunity also built my character, I have learnt to immerse myself in different cultures, communicate with different people, and be myself. Most importantly, I have also learnt to be independent, because self-sufficiency is a cool virtue in Germany. I have also learnt to think fast, plan and budget.

I would like to encourage everyone to take the challenge and go abroad to experience, learn and discover another world, maybe just like me you would also discover more interesting sides about yourself! So, why not go for it!?