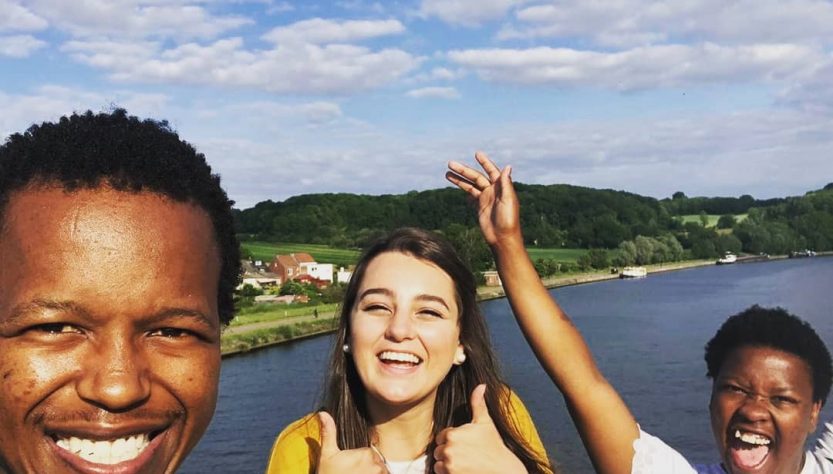 Having travelled abroad several times before I applied for the exchange program, I was reasonably prepared for the pre-departure admin. I assumed, naturally, that the pre-departure process would be like my previous trips. Once accepted for the exchange, I would gather a bunch of documents and make an appointment at the visa office. Several weeks later, I would make the trip to Cape Town and patiently wait for my visa to be accepted. Within a week, it would be approved, and I would be ready to depart. Sadly, I was mistaken. A series of mistakes cost me valuable time and forced me to book my flight a mere five days before I departed. Assuming you want to avoid panic and stress, these are some things you might want to do:

Read as many of these blogs as possible. Some people have discovered indispensable gems – you do not want to miss out.

Once you manage to get through all the preliminaries, you will catch your flight and presumably land in Amsterdam. From there you will catch a bus or train down to Maastricht down in the south. This quaint city nestled between Belgium and Germany will become your new home for the semester. In addition, if you are one of the lucky ones, which I hope you are, a part of you will remain in Maastricht forever.

It took me about two months to truly fall in love with Maastricht. The first few weeks were difficult. I found myself struggling to adjust to the weather, teaching style, and social circles that were forming around me. During this time, I missed home and did not look forward to the prospect of spending another three months in Maastricht. Nevertheless, things turned around and I am extremely happy I decided to go on this exchange.  Maastricht is undoubtedly a beautiful city filled with many exciting touristic things to do and I did as many as possible, but I will always remember it for the people I have to meet there. Without them, the experience would have not been the same.

Most of my time was spent at the guesthouse where I stayed in a section made up of full-time students. Despite being chaotic at times, it was a section filled with warm and friendly people who made me feel welcome from the time I arrived. Some of them, for whom I am truly thankful, ensured I didn’t burn down the section as I was learning how to cook.

The other group I spent time with was a wonderfully diverse bunch compromising of people from America, Brazil, Columbia, and a few European countries. Most days were spent sitting in someone’s living room appreciating the peculiarities of our respective nations. Sometimes we had picnics together and cycled through the city for fun. The greatest adventure, however, was when 16 of us decided to travel together for a week. First Germany, then Prague and then Budapest to end what proved to be an unforgettable trip.

I was also fortunate to find a group closer to home: “Saffas in Maastricht”. Not too long after joining the group, I met up with two South Africans for drinks. Our meet up provided the taste of home that I was missing. Although we did not meet frequently afterwards, someone did host a braai that I gladly attended. We got a chance to put some pork chops on the fire, stick a peppermint crisp tart in the fridge, and enjoy South African classics such as Weekend Special by Brenda Fassie. In addition, of course, the night would have been incomplete if we did not sokkie at the end. We also had fun on the Whatsapp group that kept us updated on all the weird and wonderful things happening in South Africa. Observing South Africa as a semi-outsider was surreal.

The final group was one that formed at a church called Redeemer in Maastricht. Once again, it was a wonderfully diverse group of people that I could interact with. Germans, Poles, Indonesians, and Canadians amongst others. Most of the time we spent together was on a Sunday at church or during the week at someone’s flat where we would have Connect Groups. Some of the other time we spent doing things like attending festivals, watching movies, or simply sharing a meal and playing board games. At the end of the exchange, it was especially difficult to say goodbye to this group of people who had helped me find a home in Maastricht.

Something people do not stress enough is how quickly time flies by. While in the heat of the exchange, I certainly experienced wonderful moments that will stay with me forever. However, it was only on the last day that I could truly and fully appreciate how amazing the experience had been. It had truly been a dream come true.

Surprisingly, settling back into normal South African life was easy. After spending about three days reminiscing and borderline wallowing, I took some time to meaningfully reflect on the experience. It was an experience that exceeded all my expectations and for which I have much to be grateful for. I made incredible friends, explored new parts of the world, and returned with invaluable perspective. South Africa, however, remains home and I was excited to return. I got a taste of life in another country and I could appreciate all the things that make both countries unique. Thank you to the Stellenbosch International Office for making my dream a reality. I am eternally grateful.