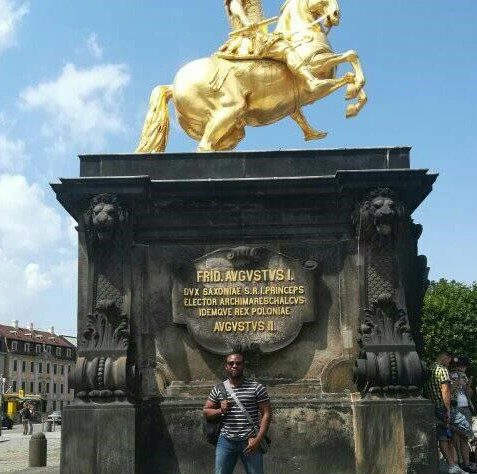 I was in Germany for a three month research stay at Humboldt University, Berlin. Berlin is a city of memories, from the intimate blend of the old and new – evident in the way cobblestone roads kiss their much younger, tarred counterparts to constantly remind one of the debris of memory interred in the womb of the city – to the imposing dome of the Bode museum which is sternly guarded by the TV tower at Alexanderplatz, the city presents itself as one huge archive. It is to this magnificent city of cultures and memories that my stay abroad took me. Although I couldn’t visit every part of Deutschland, the whole of Germany – and the world – came to me in bits and exciting pieces in Berlin. More importantly, I couldn’t have picked a better period for my stay; it was right in the heart of summer!

Before leaving Stellenbosch, I and a crop of bright-eyed would-be explorers were taken through a robust course on the demands and pleasures of being ‘glocal’ citizens. We were prepped on how to handle culture-shock and a myriad of other issues (the session was so well resourced that I started thinking Sarah should be moonlighting as a psychologist).

I was hosted by the Institute for Asian and African Studies (IAAW) at Humboldt University Berlin. Beside the high global reputation which the institute enjoys as a Mecca of sorts for African scholars seeking the commune of other scholars of Africa (I met with a truly pan-African cohort of visitors when I arrived), the institute hosts a remarkable crop of students and researchers who are truly passionate about Africa and her epistemologies. My stay in the institute was intellectually nourishing: I presented a chapter of my thesis and got insightful comments and feedback. I also enjoyed the collection of rare books owned by the institute’s library – I wish I had more time to explore the secrets of those shelves.

The University library (Grim library) held even more literary gems, so I made it my home (yes, it’s named after the Grim brothers); I hunted for old books on Unter den linden street, attended seminars at FU Berlin and Haus der Kulturen der Welt – where I met Paul Gilroy (author of The Black Atlantic). But I also found time to drink a new brand of beer with friends after each long hibernation in the capacious womb of the Grim library (Germany has over 5,000 beer brands!); I sat beside the Spree to watch dancers learn new steps under a brightly lit wooden shed which projects images of the dancers onto the river in a cornucopia of colours. Oh, and there was the diver who hopped into the depths of the river from a bridge amidst muffled screams of worry from onlookers, only to clamber up the slippery bank of the river with his hanging belly dripping water as he left the scene laughing. I also visited Dresden where the magnificence, opulence, and consumerism of medieval Europe remains evident despite the destruction wrought on the city by Allied bombing during the second world war. Of course, the scars are still evident, but they feel like battle scars which evidence survival.

Travelling abroad was a truly rewarding experience; I have forged transnational academic networks and friendships that have awoken me to my importance as an interlocutor in global debates and cultures. Also, the different energies birthed in the truly cosmopolitan mix of bodies and cultures of Berlin propelled me through the final but arduous stages of my thesis. In my wanderings around the multiple sites of Berlin’s offerings of knowledge and fun, I might not have found the cure to violence in Africa – as I had set out to do at the ingénue state of my research; but what I did find is that the we are making some progress in telling African stories beyond the worn narrative thread of hunger and privation. I am grateful to Stellenbosch University International Office (SUI especially Sarah) for the support they offered, IAAW at Humboldt University for making my stay truly memorable, and to DAAD for making me feel that my research might be truly important after all.